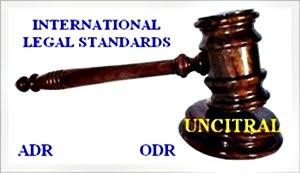 Alternative Dispute Resolution (ADR) in India (ADR in India) is primarily guided by the Arbitration and Conciliation Act, 1996. It has been almost 14 years since the Act has been enacted and lots of economical, commercial and technological changes have taken place since then.

This is the main reason why Law Minister Dr. Veerappa Moily has suggested for bringing suitable amendments in the same. Even the National Litigation Policy of India (NLPI) has incorporated good provisions regarding effective use of ADR in India.

However, neither the NLPI nor any other statutory or administrative provisions has shown any interest in use of Information and Communication Technology (ICT) for dispute resolution. Naturally, Online Dispute Resolution (ODR) in India (ODR in India) does not exist.

The problem of ODR does not end here. Currently, there are few “Legal Standards” on ODR Worldwide. Further, there is no “Harmonised Model” that can be adopted by all the Nations. If Nations keep and use their respective country law for ODR purposes, the entire purpose of using ODR would be frustrated. This is so because there would be lots of “Conflicting Laws and Norms” that would frustrate the growth of ODR Worldwide.

It is now a widely accepted fact that traditional judicial mechanisms for legal recourse did not offer an adequate solution for cross-border electronic commerce disputes. The solution might reside in a global ODR system for small value, high volume B2B and B2C disputes.

The United Nations Commission on International Trade Law (UNCITRAL) is working in the direction of providing a “Harmonised Legal Framework” for ODR. At its forty-third session (New York, 21 June to 9 July 2010), the Commission considered a note by the Secretariat on the issue of ODR and constituted a “Working Group III” on ODR in this regard.

The 22nd session of the Working Group III would be held on 13-17 December 2010 at Vienna. Among other issues, it would consider preparation of legal standards on ODR. This is the trickiest business as countries like India are not prepared for the present “ODR Regime”. Popular support at the National level of India is required before any such initiative can succeed in India.

In the absence of any “Harmonised Law”, ODR is bound to fail. UNCITRAL has already started the ball rolling by seeking the support of representatives of almost all the countries all over the World, including India. Although the intentions are good yet there is a “Severe Lacuna” in this approach. Along with the “Institutions” who are part of the Working Group III, the UNCITRAL must extent its reach by including those Organisations or Firms or even Individuals who possess expertise in this regard. For instance, in India there are very few “ODR Providers” and none of them are part of the “Working Group III”. In such circumstances, legal standards for ODR in India cannot be formulated as the ODR experts have already been excluded from this exercise. The “Institutional Framework” of UNCITRAL may not allow inclusion of Organisations/Firms/Individuals, but without their active support this ODR exercise may not succeed.

We at Perry4Law and Perry4Law Techno Legal Base (PTLB) are working in the direction of making ODR in India a success. We are providing ADR and ODR Trainings in India so that the “Culture” and “Legislative Framework” for effective ADR and ODR can be developed in India.

We wish all the best to UNCITRAL and its Working Group III and hope that their efforts and initiatives would materialise into a “Globally Accepted ODR Framework”.
Posted by PTLB at 1:15 AM